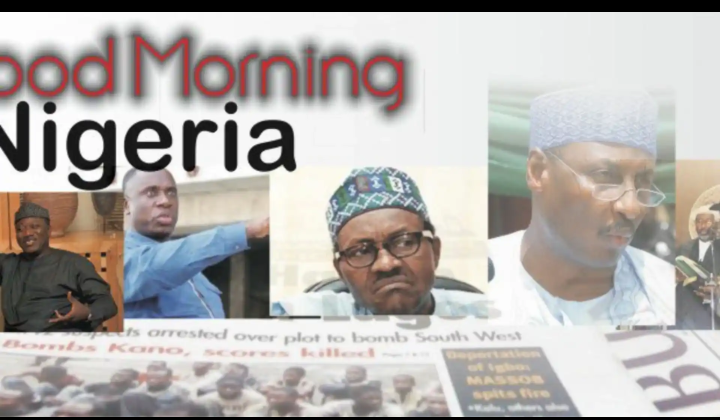 Nigerian Newspapers: 10 Things You Need To Know This Sunday Morning

1. More than 10 persons lost their lives in Ondo State on Saturday night in an accident that occurred in Akungba-Akoko, Akoko South West Local Government of the State.

The accident was caused by a truck loaded with rice, which was said to have suffered brake failure before it rammed into a popular market known as Ibaka in the town.

2. United States forces have rescued Philip Walton, 27, an American taken hostage in Nigeria by gunmen in Niger on October 26.

The operation reportedly lasted several hours, and eliminated six of the seven kidnappers.

3. The Governor of Lagos State, Babajide Sanwo-Olu, has lifted the curfew imposed on the State with immediate effect.

This was contained in a press release signed by Gbenga Omotoso, the Lagos Commissioner for Information and Strategy, on Saturday.

4. The Nigerian Government has finally reacted to the vandalization of the properties of Television Continental, TVC, and the Nation Newspaper by hoodlums in Lagos State.

Alhaji Lai Mohammed, the Minister of Information and Culture, on Saturday, described the action of the youths as assault on free press and democracy.

5. The Governor of Lagos state, Babajide Sanwo-Olu, has directed all public servants on Salary Grade Levels 1- 12, to resume work fully from Monday, November 2, 2020.

6. The Obong of Calabar, Edidem Ekpo Okon Abasi Otu V, has called for an interim government in Cross River State.

This follows the breakdown of law and order in the State, which has led to vandalisation and arson of both private and government properties.

7. The Federal Government says it has no intention of shutting down social media.

The Minister of Information and Culture, Alhaji Lai Mohammed, who made the clarification on Saturday in Lagos, said the Muhammadu Buhari led administration has high regards for freedom of the press adding that its plan is to regulate social media to be responsible and refrain from giving out fake news and hate speech.

8. Rev. Polycarp Zango, a pastor with the Church of Christ in Nations (COCIN) in Jos, Plateau State, has been released from the captivity of Boko Haram, Vanguard reports.

Zango was kidnapped by the insurgents on October 19, while on a journey to a Ministers’ conference in Gombe.

9. The Federal Government, has assured Nigerian youths that the End SARS protests will not be in vain.

Minister of Youth and Sports Development, Sunday Dare, who said this on Sunday via his Twitter page in celebration of Maiden National Youth Day, said the time has come for Nigerian youths to sit with the government and deepen their initiatives to effect a change.

10. The Governor of Kaduna state, Nasir El-Rufai, has said it is time to restructure Nigeria, in order to ensure equitable distribution of resources.

El-Rufai stated this on Saturday, while speaking at a public lecture to commemorate the 50th anniversary of Arewa House in Kaduna. He cited the 2018 recommendations of the All Progressives Congress (APC) committee on restructuring and noted that there was a need to reorganise the country’s constitutional framework, in order to give states more control over certain resources.