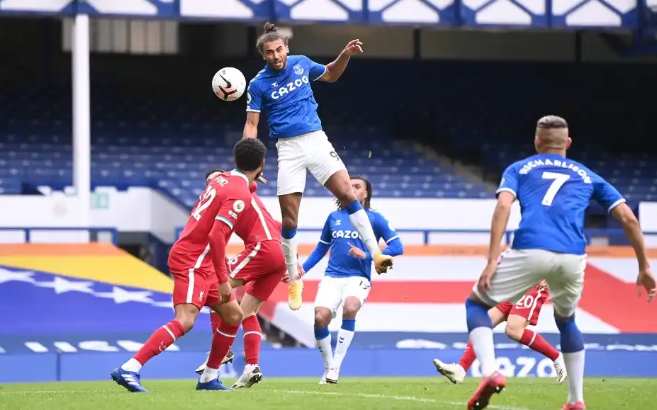 Everton’s long wait for a win over Liverpool goes on but they prevented Liverpool from claiming the bragging rights as the two sides played out an incredible 2-2 draw at Goodison Park.

The last three Merseyside derbies at Everton’s home had been low key goalless draws – not this one.

Jurgen Klopp’s side got off to a blistering start as Sadio Mane slammed them in front but Liverpool lost star defender Virgil van Dijk minutes later after he was scythed down by Jordan Pickford, who was lucky to escape a sending off.

Pickford fouled Van Dijk in the box but no penalty was given as the Dutchman was offside. However, the England and Toffees’ No.1 wasn’t dismissed as it later emerged VAR failed to analyse the tackle as they were focusing on the offside in the build-up.

Van Dijk went off after that challenge and the game then swung in the home side’s favour as Michael Keane levelled the scores with a glancing header from a corner – the goal raising more questions about Reds stand-in goalkeeper Adrian’s credentials.

Both sides exchanged chances in the first-half but plenty more drama followed after the break.

Calvert-Lewin failed to connect with a cross from the left with the goal at his mercy, while Richarlison hit the post with a header.

And out of nowhere, Salah put Liverpool back in front, firing into the bottom corner after Everton failed to deal with a cross from the right. The goal is Salah’s 100th in Liverpool colours, making him the third-fastest to achieve the feat.

But the Premier League champions were pegged back once again as man of the moment Calvert-Lewin got his tenth goal for Everton this season with a towering header.

The drama continued into the closing stages as Richarlison was deservedly sent off for a nasty challenge on Thiago Alcantara.

And it looked like Liverpool had won it in stoppage-time as Jordan Henderson got on the end of a low cross from the left as the ball went through Pickford.

But the Toffees and their keeper were spared once again as Mane being offside in the build-up with the most marginal VAR call.