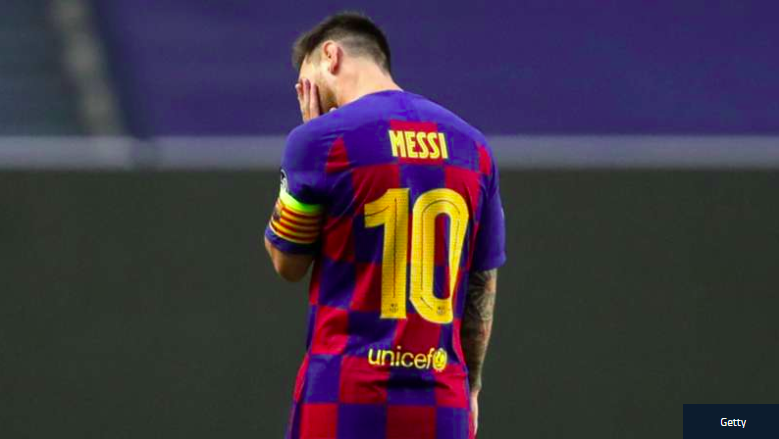 Only One Thing Can Stop Messi From Fleeing Barcelona Disaster

Barcelona is Lionel Messi’s home. His literal home is just a few kilometres down Spain’s Costa Dorada in sun-soaked beach town Castelldefels, but Barcelona is his spiritual home.

You cannot move in the Catalan capital without being reminded of Messi. His shirt hangs in bars and restaurants, his image appears in shop windows and nearly every time you leave the house you will see somebody in Blaugrana colours sporting his No.10.

And when someone mentions Barcelona football club, Messi is near synonymous.

But for how much longer?

The Argentine attacker, 33, is reaching the final years of his career and all being right with the world, he should be immensely comfortable where he is, becoming Barcelona’s granddad, someone a team of young, impressive talents can feed with fine passes, do the running for, and learn invaluable lessons from.

Instead he is still in the front line, leading the charge, dragging the Catalans behind him kicking and screaming. At times in their 8-2 humiliation by Bayern Munich, it seemed the team behind him didn’t want to progress. Even the usually excellent Marc-Andre ter Stegen, the one player who has Messi’s back time and again, gave the ball away far too frequently.

The team is at a dismally low ebb, after throwing away the title to Real Madrid – whom we saw against Manchester City are not at an elite level – to finish the campaign empty handed for the first time since 2007.

Messi, who has won so much, has been betrayed by his club, and more specifically, the board, who have spent years digging the rut Barcelona are lying in, deeper and deeper.

That much was emphasised when Bayern substitute Philippe Coutinho set up a goal for Robert Lewandowski and then netted twice himself, to leave Barcelona with €160 million (£145m/$190m) worth of egg plastered across their face.

Burning up the €222m (£200m/$262m) Neymar windfall on failed bets like Coutinho, Ousmane Dembele and Antoine Griezmann is one of several crimes committed by president Josep Maria Bartomeu and his sidekicks, and it has left Messi virtually alone in his efforts to keep the silverware flowing.

The six-time Ballon d’Or winner, arguably the best player that has ever lived, is being denied the chance to add to his trophy cabinet by the ineptitude of those above him at the club. It is a disgrace that Messi has not lifted the Champions League trophy for half a decade.

The South American is feeling something he hasn’t before. Messi hasn’t come close to leaving Barcelona but now he is having serious doubts.

He has been pleading with the board to change something, saying that the team might not even beat Napoli if things weren’t shaken up. Barca did, but might wish they hadn’t after the brutal savaging issued upon them by Hansi Flick’s relentless Bavarian outfit in Lisbon.

Gerard Pique echoed those comments after the game, insisting that things had to change at all levels, indirectly calling for presidential elections at the club.

“We have hit rock bottom,” said Pique. “This is not the first, nor the second, nor the third time. We are not on the right path. Coaches and players follow one another, but it has been several years since we have been able to be competitive on a European level.

“We all have to think internally and decide what is best for the club, for Barca. Tonight was unacceptable for Barcelona. The club needs changes. And I’m not talking at the level of the coach or the players; structurally the club needs changes of all kinds.”

Bartomeu cannot stay beyond his current mandate, with elections due to be called in 2021, but if the president has any shred of decency, he will leave now. Because changing the coach just isn’t going to cut it.

That doesn’t mean Quique Setien shouldn’t be sent back to walk among the cows in his Cantabrian village, because he has not earned the respect of the players during his stint at the club and has ended up playing Ernesto Valverde-lite football.

Barcelona may as well have kept the coach whom they sacked in January, despite his two La Liga title wins and the team being top of the league at the time.

Setien is not to blame for the 8-2 thrashing, at least not primarily, because Valverde lost 4-0 to Liverpool and 3-0 to Roma to crash out in similar style. And Luis Enrique before him was thrashed 3-0 by Juventus. The coach can only do so much if the board are not doing their jobs.

Barcelona’s squad is ageing and yet they decided to sell Brazilian midfielder Arthur, 24, in an exchange for Juventus’s Miralem Pjanic, 30. No offence to the Bosnian, who is a fine player, but this is the kind of ugly move that Barcelona don’t need, made to balance the books rather than improve the club’s chances on the pitch.

“Pique is right and we have to take decisions,” Bartomeu said after the match. “Some we had taken before the Champions League and others we’ll take in the coming days.”

Setien is dead in the water but Bartomeu is the one who should be resigning at the board meeting that has been called for Monday.

Mauricio Pochettino has been lined up as the replacement, but this is a coach who played for and supports Espanyol, who said he would never take charge of Barcelona and was waiting for the Real Madrid job. That shows how low Bartomeu would stoop.

The president has turned the Catalan giants into a laughing stock – “you 8-2 see it” – with Barcelona shipwrecked in a defeat that you have to go back the better part of a century to match in their history – they lost by that scoreline against Real Madrid in 1935.

Barcelona’s rebuild needs to start now, as Pique says, which would mean cleansing the squad of those who can no longer offer enough, such as Ivan Rakitic, Arturo Vidal and Luis Suarez.

They need to bring in fresh blood like Riqui Puig and Ansu Fati, who was bright in his cameo against Bayern.

Xavi Hernandez is Barcelona’s future, but he will not come until Bartomeu is gone, with the legendary midfielder waiting for the elections before returning.

Xavi shouldn’t have to wait. Bartomeu must go – now. The supporters would have told him so, if they had been able to pack Camp Nou, but for the coronavirus pandemic.

For Messi’s sake, the change needs to happen quickly. Barcelona are squandering the final years of his career. If another season of turmoil beckons then maybe, just maybe, it is time for him to think about leaving his home.